Stable Diffusion Is To Visual Art What Squarespace Is To Website

Phrase goes in, JPEG goes out. In seconds. With tools like Stable Diffusion, Dall-E, and Midjourney, non-artists are on equal footing with experienced artists (in terms of output). Now everyone can make art.

But… what could be next?

Text-to-app: input a short prompt, and it’ll output a production-grade, deployable full-stack app, catered to the specific use cases.

Text-to-movie: input a short prompt, it’ll output a Netflix-quality series—hundreds of hours of entertainment, with AI-generated characters, stories, and music.

Text-to-companion: input a short prompt about personality traits, it’ll output an AI companion that chats like a friend (or a lover).

Text-to-blender: input a short prompt, it’ll output a printable 3D model, which can be as small as a pebble and as large as a spaceship—giving people the ability to manifest any physical object with a prompt.

If the examples above were to become real, web developers, novelists, movie directors, actors, and 3D artists won’t be happy—these AI tools will cut a slice of their pie.

“But… job automation?” These tools require creativity to use—they don’t replace human creativity. Here is a thought experiment: Imagine if we had the technology to revive one legendary artist. Let’s say we agree to revive van Gogh. After being revived, van Gogh acclimates to the modern world and starts painting again. Will the paintings he create be of less value than van Gogh art created by Stable Diffusion? No.

Stable Diffusion will do to visual art what Squarespace did to websites. The existence of Squarespace didn’t eliminate web developers and designers—it gives non-coders a leg up by enabling them to create simple websites without hiring web developers. For advanced, pixel-perfect websites or apps with custom transitions, cohesive color palette, displaying real-time data with millisecond accuracy, that scales to billions of users? No, no, website builders won’t cut it. 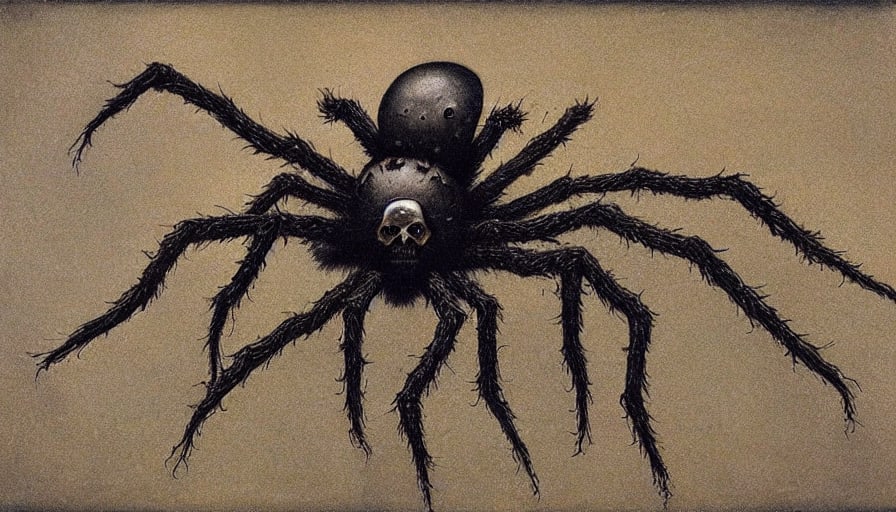 I couldn’t create visual art. At best, I could draw a funny-looking stick-man, and that’s about it. Now I can create these jaw-dropping art by stringing English words. (The prompt of the spider above: scary black giant spider beksinski.)

English is now a programming language. The future is exciting.